Why protein supplements will make you fat

Protein seems to be a very poorly understood topic, especially among firefighters. I could write for days about this but today’s post is limited to one critical message:

Contrary to popular belief, protein supplements are for weight GAIN, not weight loss. 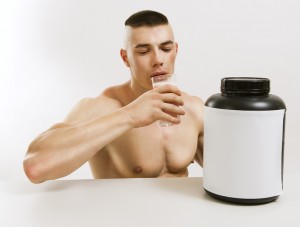 If you are hoping to lose weight, or just maintain a healthy weight, you should not be taking in protein powder supplements nor protein shakes or bars.

While protein shakes and bars have been marketed as diet foods, they are not good tools for dieters. People trying to eat fewer calories should be choosing foods that are low in calories but high in volume. Bars and shakes are the opposite: they pack in a lot of calories within a very small volume. For this reason, protein bars were originally developed as meal replacements, and they should stay that way. They are a good thing to carry at work in case you have to skip a meal. But don’t expect to eat something like this as a meal and feel full. Another problem is that they often have too much sugar and fat in them.

So if you’re trying to lose fat but gain muscle at the same time, should you be taking protein supplements?

Even if you are doing resistance training, powder supplements are only needed if you can’t get in enough calories in order to GAIN mass. If you have a little extra fat to spare, those reserves will burn down so your muscles have fuel to hypertrophy (get larger) in response to resistance training. At the end of the day, in order for muscles to hypertrophy, your body just needs enough fuel (calories) to make that happen, and those calories can come in the form of fat, carbohydrates or protein. Moral of the story: Eating more protein does not equal having a muscular physique.

Hopefully you can now correctly answer NO to the question above.

Now I want to hear from you. Have you taken protein supplements and experienced difficulty getting the physique you want? Or have you had success with them?